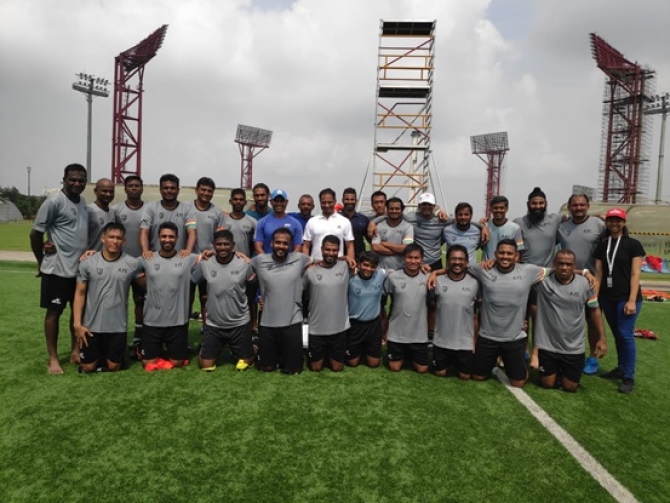 NEW DELHI: On Wednesday (November 20, 2019), 12 coaches passed the AFC A Certificate Course after completing three challenging modules – the first of which took place in April earlier this year. Among the successful candidates was former Indian national team captain and current assistant coach Venkatesh Shanmugham, who stated that the course was “challenging yet enjoyable”.

He said, “With the updated curriculum, the course was a challenging experience for all of us and also enjoyable at the same time. The increased length of the course — almost 6 months — enabled us to learn more. The exchange of ideas with all the fellow coaches was a great experience as well.”

Former India captain and renowned centre-back Gouramangi Singh successfully passed the course as well, calling it “demanding” and mentioned that it “prepared them perfectly” for the real job.

Gouramangi, who was named the AIFF Player of the Year in 2010, said, “The course was demanding and had us committed for 6-7 months across three intense modules. From what I understand, there were a lot of positive changes in the practical methodology and theory content from the previous versions — which has been adapted according to a modern approach. I really believe that this course prepared us perfectly for the real job of coaching.”

Firmin D’Souza, who led India to victory last year in the 2018 SAFF U-15 Women’s Championship, was also among the coaches who passed with flying colours and he hailed the course as “revolutionary”.

“The curriculum has improved by leaps and bounds, which has been nothing short of revolutionary. A lot of opinions were shared over these months as we all learned from each other. Along with the theoretical aspect, we learned a lot about the application and practical part of the game,” he said.

The coaches reserved a special word of gratitude for the course instructors as well. “The instructors were interactive and empowered us to learn and grow. I would like to thank Savio (Medeira) sir and the other instructors for their invaluable contribution in making us better coaches,” Firmin stated, echoing his colleagues’ sentiments.