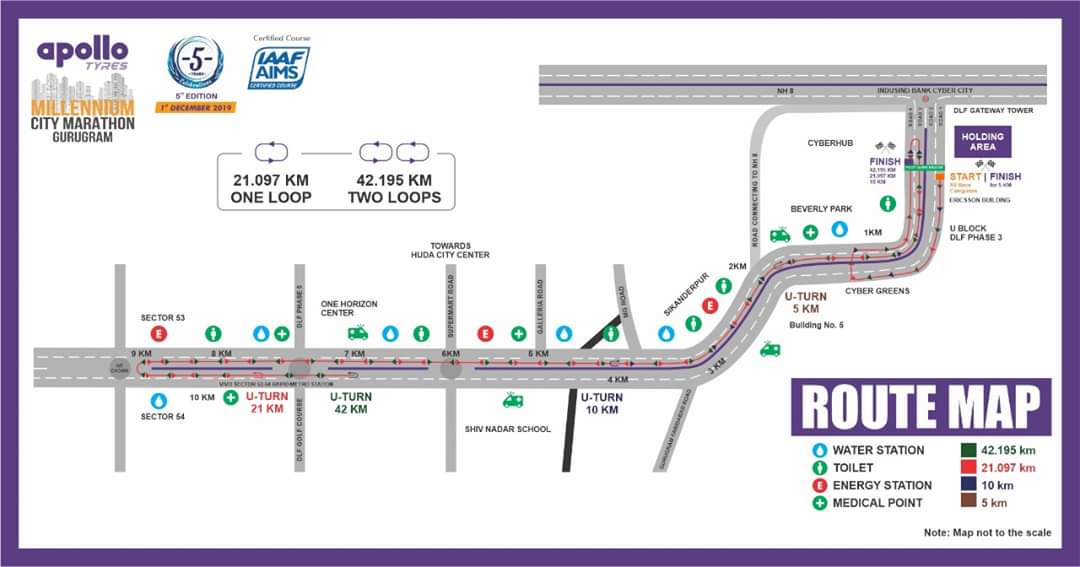 Gurugram, 22 November 2019: The Apollo Tyres Millennium City Marathon, to be held on December 1, will be more enticing this time for runners as the route, certified by World Athletics (till recently known as the International Amateur Athletics Federation – IAAF), envisages a bit more time on the iconic Golf Course Road underpass.

MCM Race Director Abhishek Mishra, himself an UltraMan finisher, says the feedback from runners about the underpass has been so overwhelmingly positive that there was no hesitation in adding extra distance. “This also assists the Gurugram Police and the Gurugram Traffic Police to ensure a smooth flow of traffic,” he says.

The race route does not take the runners towards Sector 56 for the U-turn at the halfway mark for the half marathon. The route provides for an extra U-turn for the half-marathon and two for the full marathon near the Sector 53-53 rapid metro station after having taken a turn into the other carriageway near the AIT Chowk.

“Over the years, one of the highlights of the Millennium City Marathon is the hassle-free run that the participants can have, with the Police ensuring that traffic does not impede the runners at any point of time,”  the Race Director says. “We take pride in enabling every runner, including the last one, also have the same experience.”

There are adequate sections at road level so that the runners can see daylight, too.
The other big decision that Tobono Sports, which organises the Millennium City Marathon, has made is to locate the finish points for the timed runs and the fun runs at different place. “It will ensure that those seeking to sprint to finish in the timed runs (full marathon, half marathon and 10km) do not have to jostle with those who participate in the 5k run,” Abhishek Mishra says.

“While the start-finish line is the same for 5k runners, the timed runners will complete their distances in front of Cyber Hub. We believe that this innovation will be welcomed by all runners, especially those seeking to improve their times on an IAAF-certified route and in an Athletics Federation of India-certified event,” Abhishek Mishra says.

The safety aspect of the race has always been praised by runners, especially since the route is closed for vehicular traffic till after the last runner crosses the finish line. The number of hydration stations, first-aid points and ambulances on stand-by will give runners the confidence that they will be well provided for.