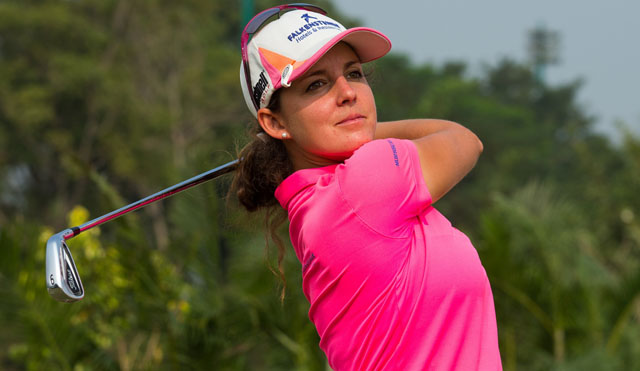 Gurgaon: Four players carded 2 under 70 to share the clubhouse lead after the first day of the Hero Women’s Indian Open at the DLF Golf and Country Club here on Friday. Florentyna Parker, Christine Wolf, Ursula Wikstrom and Anne-Lise Caudal carded identical scores to share the pole position. Following them in tied fifth position are defending champion Emily Kristine Pedersen, English golfer Kiran Matharu and the Spanish duo of Nuria Iturrios and Patricia Sanz Barrio at 1 under 71. Indian Olympian Aditi Ashok carded an even par 72 to finish in tied ninth after the first round. Pamela Pretswell couldn’t complete her round due to bad light and will continue her round on Saturday morning.

England’s Florentyna Parker, who began her campaign from the back nine, started impressively and was three under par after four holes. However, she struggled to sustain the momentum and needed birdies on the final two holes to grab the top position. She said, “I started really well today and was three under after four holes, then unfortunately I made a double bogey. But I made six birdies today which on this course is really good. My putting was really good, I holed a lot of putts.”

Olympian Christine Wolf seemed very happy with her performance. She carded three bogies and two birdies in her front nine. However, the professional from Austria turned things around brilliantly in a relatively trickier back nine to fire a blemish free latter half with three birdies. Talking about her round, she said “I’m really satisfied, especially as I started with plus three after four holes. I just started hitting greens and making putts. I left some chances out there, so I know you can score well here. I really like the course and I liked it last year. You know, the greens are a bit tricky, so if the putter works, it helps.”

Finland’s Ursula Wikstrom carded four birdies and a double bogey to stay in contention for her first LET title. Anne-Lisa Caudal from France played a controlled round with three birdies and a lone bogey to share the top spot.

The Indian golfers had a mixed day on the park with only three of them managing to finish in the top 20. Aditi Ashok finished best among the Indians with a score of level par 72 to be tied for the ninth position along with six other players including Gwladys Nocera and Isabelle Boineau.  Aditi struggled with the back nine but three straight birdies on the 6th, 7th and 8th holes helped her to finish two shots adrift of the leader group. She said, “I hit all the greens on the front nine, so I was missing quite a few but I hit it really close on the sixth hole, to about five feet, and then close on seventh, which was 10 feet and close on eighth as well. I missed quite a few and they had to go in at some point.” She seemed pleased with her first round, she said “It’s not a great start but it’s not bad either. I can still make up for what I missed today tomorrow, so that should be good.”

Other notable Indian performers on the day were Vani Kapoor and amateur Diksha Dagar. Vani, playing on her home course, played a cautious round to finish with a respectable score of 1 over 73. She carded two bogies, but a birdie on the final hole helped her to finish in tied 16th position. Diksha Dagar carded 2 over 74 to share the 20th position. She could have had a much better finish, but for bogeys on the final two holes.